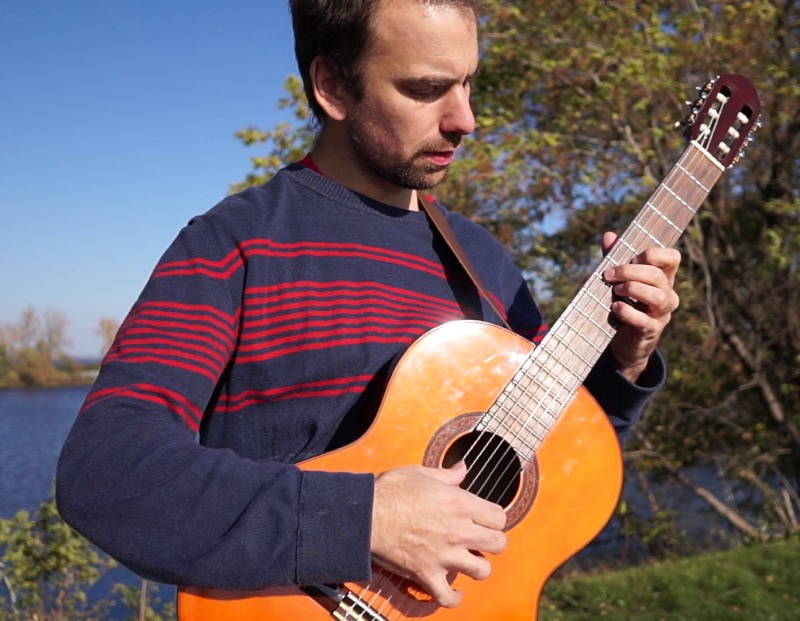 This evocative work from Tarot Cards, a suite for Classical Guitar possesses an exotic feeling. To show this, I had to do something unusual to my guitar.

The Chariot (VII) is the seventh trump or Major Arcana card in most traditional Tarot decks. Usually depicted on the card is a powerful, princely figure sitting in a large chariot, pulled usually by two sphinxes or horses.

I tried to give this composition an exotic Middle Eastern feel by tuning the first string of the guitar a quarter tone flat. In my mind this evokes the Arabic scales or "maqam" which are commonly found in music all over Northern Africa and even in Turkey.

This piece starts off with some strong chords, showing how the Chariot announces the arrival of a victorious leader. The strummed chords are quickly followed by a flowing foreign-sounding scale that rises up and down the middle register of the guitar.

Finally after the introduction we hear the theme, which is a proclamation in a march-like fashion. Perhaps the Prince annoucing to his subjects the results of the recent battle, where he emerged victorious.The ancient warriors would ride on the chariots and use them as a tool to conquer their enemies.

Towards the end of the piece the melody softens to a quiet close, before being stirred up again with flowing scales.  We may think of the victorious army leaving the city, now having shown their power and prestige. The piece ends with the same chords heard at the beginning, strummed "fortissimo". You can listen to the piece "The Chariot" from Tarot Cards by clicking the link below.